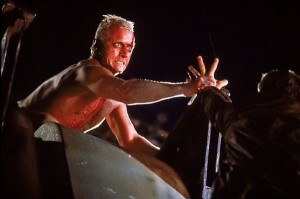 Rutger Hauer is more than human in this villainous role, because that’s exactly what his character is. “More human than human” is the motto of the Tyrell Corporation that built him, and that is what Roy Batty is, a Nexus Six android created to serve mankind but who winds up stalking it. He’s faster than Harrison Ford’s Deckard, smarter, and stronger.

And he’s got a Class A grudge against humanity and against the scientist who created him but gave him an artificially short lifetime. Few moments in cinema are as chilling as Roy’s hissed answer to his creator asking what he wants, “I want more LIFE, father,” just before gouging his eyes out. But at the same time, on other levels, Roy really is more human than human, as evidenced by his final act of compassion to Deckard, just before one of the best death scenes ever filmed, starting with the line, “I’ve seen things you people wouldn’t believe…”

Cowboys tend to have oily skin

What makes this screen villain so memorable, as with Chaplin before him, is the inspired choice of actor chosen to portray him. Sergio Leone, seeking to make the Ultimate Western, chose as his villain an actor whom no one else had ever conceived of as a villain, Henry Fonda. And it was a casting masterwork. Those same beautiful blue eyes, so convincing and powerful and loving and trustworthy in heroic roles, became bone-chilling in the character of Frank, who shoots children without even batting his baby blues. The same voice that had been so inspiring in The Grapes Of Wrath and so many other roles became positively wrathful in dialog like:

Morton: Not bad. Congratulations. Tell me, was it necessary that you kill all of them? I only told you to scare them. 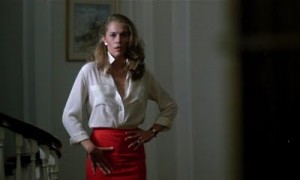 She can be my villainess any time…

No list of great movie villains would be complete without at least one great villainess. One of the best was Matty Walker, as played by Kathleen Turner. Matty is smokin’ hot, but also has the cunning intelligence of a born predator, a woman whose first lines to the guy intended to be her next victim are, “You aren’t too smart, are you? I like that in a man.” Sure enough, he isn’t, and is lured into the classic Film Noir fate that awaits him.

Meanwhile Matty remains fully in charge at every moment, planning every move twenty moves ahead like a chess master, setting everything and everyone around her up for the payoff. She is the ultimate villain, a person who will do what is necessary, whatever is necessary, to achieve her goals. 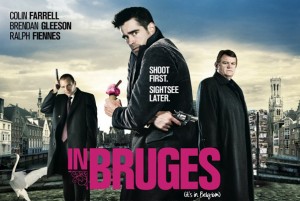 I’m going to finish up this list with two “triple headers.” That is, films in which there were not one, but three great villains. All of them were “hit men,” meaning that they killed people for money, and as such all of them pretty much qualify as villains. But they are also characters, in every sense of the word, especially in this wonderful film by Martin McDonagh.

Played by Colin Farrell and Brendan Gleeson, Ray and Ken are two hit men told to take a forced vacation in Bruges, Belgium after a hideously and tragically botched job. Harry, played by Ralph Fiennes, is their boss, who instructs Ken to whack Ray, and when he doesn’t, comes to Bruges to whack the both of them. What makes these hit men so memorable is that they are funny hit men, and force us to remember that – beneath all the villainy – they are still men. Harry is the most over-the-top villain, but even he has a sense of humor. When a bystander tells the three of them to stop trying to kill each other and chill, he replies, “Don’t be stupid. This is the shootout.”

Stansfield, Léon, and Mathilda in Léon: The Professional (1994)

The second “triple header” is composed of Gary Oldman (who has made almost a career out of playing over-the-top villains), Jean Reno, and Natalie Portman as another group of stone killers. Oldman is a given; his screamed “Kill EVERYONE!” is a classic of cinema. And Jean Reno, that National Treasure of French Acting, is superb as Léon, the hit man with a heart of gold. But it is Natalie Portman as Mathilda who steals the film, at age 13, in another career-making role. Early in the movie, Léon saves Mathilda from being killed by Stansfield and his cronies. But after he hides her and keeps her safe, she cajoles him into teaching her how to be a hit man, too. And so he does. The result is movie magic.

These are a few of my favorite movie villains. Who are yours? Also, if you’re a fan of horror (or comedy!) do check out out top 10 list of the worst horror movies. They are so bad that it would be worth your while to watch it!