While we all may root for the hero or heroine in the movies we love, often the characters we remember most vividly are the characters they had to do battle with – the villains.

A good villain can really make a movie, and transform a merely good movie into a great one, a film that becomes an instant classic, and that is loved for generations. So while I like heroes and heroines as much as the next guy, the following list is a celebration of those other guys, the villains, the characters who provide them with the impetus to become heroes and heroines.

Dr. Hannibal Lecter in The Silence Of The Lambs (1991) 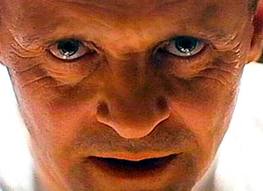 look into my eyes…

Numero Uno on almost every film critic’s list of great movie villains has to be Hannibal Lecter. Sir Anthony Hopkins’ performance as the mad doctor creeped out millions of people worldwide, and his culinary habits caused many people to swear off fava beans and chianti for life. Jodie Foster was tremendous in this film as FBI agent Clarice Starling, but it’s Hannibal we remember. His controlled, calculating, malevolent – and damnit, charming – psychosis just kept our eyeballs glued to the screen.

And while the image of Hannibal that sticks in most people’s minds is him strapped to a dolly wearing a mask to curb his carnivorous tendencies, in the end it’s the charming aspect of his madness that wins us over. Who didn’t chuckle and look forward to the future when he walked away, letting us in on his plans for his former prison psychiatrist, “I’m having an old friend for dinner.” 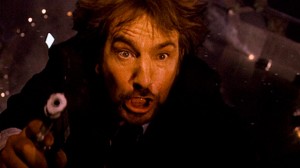 Look, I can form a perfect ‘O’ with my mouth

Another screen villain who makes everyone’s list of all time favorites is Hans Gruber in John McTiernan’s Die Hard. While it is theoretically Bruce Willis’ movie (and franchise-starter), as the police detective who has a habit of being in the wrong place at the wrong time, it was the great Alan Rickman who really made this movie. His accent and his polished, almost regal sense of style, developed so acutely on the English stage playing Shakespearean villains, were a perfect counterpoint to Willis’ rough-and-tumble New York Cop.

A great villain doesn’t have to scream and shout to elicit a shiver; Hans conveyed the full extent of his malevolence by calmly saying, in a perfectly modulated voice and with sublime diction, “I wanted this to be professional, efficient, adult, cooperative. Not a lot to ask. Alas, your Mr. Takagi did not see it that way…so he won’t be joining us for the rest of his life.” Yippie-ki-yay, Hans.

Keyser Soze in The Usual Suspects (1995) 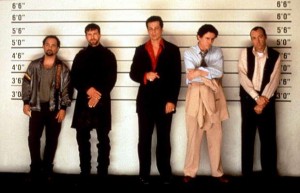 This one is tougher, because for those in the Internet audience who have not seen this film, I dare not give away who the villain really is. The terror inspired by Keyser Soze is that no one knows who he is. He is described early in the film as, “He is supposed to be Turkish. Some say his father was German. Nobody believed he was real. Nobody ever saw him or knew anybody that ever worked directly for him, but to hear Kobayashi tell it, anybody could have worked for Soze.

You never knew. That was his power. The greatest trick the Devil ever pulled was convincing the world he didn’t exist.” And for pretty much the entire length of this brilliant film, you don’t know who he is, either. The actor who plays him was so masterful that even those of us who pride ourselves on figuring out movie mysteries before they’re revealed were stumped. I have seen more movies in my life than anyone I’ve ever met, and I was clueless until the last moments of the film. And then, just as we finally learn who the villain is, he exits with a line that made movie history, “And like that…poof…he’s gone.” Gone, but never forgotten. 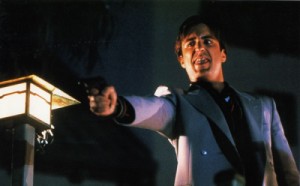 “And this is how you should smile while pointing a gun..”.

This choice is not going to make many film critics’ list, but I include it because occasionally a great screen villain can not only make a movie, it can make a career. This performance did just that for Andy Garcia, lifting him from obscurity to A-list box office star overnight, and strangely enough in a movie that was criminally underappreciated. That film was the great Hal Ashby’s last as a director, and although Jeff Bridges was wonderful in it as a former cop battling his own alcoholism as much as he was the bad guys, it was Andy Garcia’s villain who made this movie.

Garcia just nailed the “cocaine villain,” the coke dealer so strung out on his own product that he has become borderline psychotic. And it is precisely that borderline quality that makes Angel so memorable; he can be talking quietly and seemingly calmly, but you know in the pit of your stomach that at every moment he is a millimeter away from whipping out a machine gun and spraying the whole room with it. It’s the “never knowing what he’ll do next” that makes this such a villainous star turn. 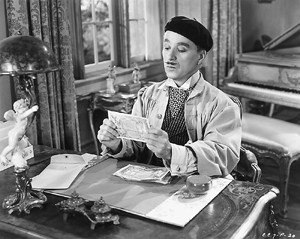 This is another choice that may not appear in many people’s lists of favorite movie villains, and with good reason. How many, after all, would wish to remember Charlie Chaplin, the only genius the cinema has ever known and the person remembered most fondly as the Little Tramp, as a villain?

Yet that is exactly what he was, and brilliantly, in this film, portraying a suave, dapper Frenchman who woos women, seduces them with his considerable charms, and then marries them. Sadly for the women, M. Verdoux is also a serial killer, offing his conquests for the money to support his real wife and family. Chaplin appears to have been having a ball making this film, finally getting a chance to stretch his acting muscles and display a range that the comedies did not provide him with. In the process, he creates one of film’s best villains ever.